There is almost no Bulgarian, who has not heard of Bansko and its beautiful nature. The region of the famous winter resort of Bansko does not stop surprising us with its variety of impressive natural phenomena and breathtaking picturesque panoramic views. Bansko is definitely a place that can offer unusual experiences to every taste. This time we will show you one of the most famous lakes in the region – the Vlahini. 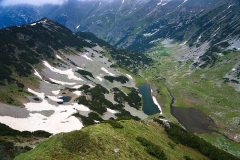 Vlahini, also known as the Vlahinski, are a group of six lakes in Northern Pirin, located between the peaks of Vihren to the northeast, Hvoynati to the east, Muratov to the south and the Gredaro Hill to the west. They are also called Vihrenski lakes and Eltepski lakes. They lay the beginning of Vlahinska River, which is a left tributary of the Struma River. The lakes were named after the village of Vlahi, as they are situated on its land.

The Vlahinski Lakes are located in the famous Vlahinski circus. It can be reached by passing north-east toward the valley of the Vlahinska River. On its eastern side, it is surrounded by the main Pirin ridge, which is by the line of Vihren Peak – Hvoynati peak– Muratov peak, and to the south-west and west, it is totally enclosed by the Gredaro elevation. At the bottom of the mountain circus, is situated the biggest and the deepest lake of the Group of Vlahini lakes – the Big Vlahino Lake.

Its total area exceeds 85 decares and by location, it is more separated from the rest of the lakes. By area, the lake represents approximately around 80 % of the total area of all lakes. The Vlahini Lakes are not thoroughly explored and for this reason, more accurate data are needed for them. They flow down through the Vlahina river, which is the left tributary of the Struma River.  In the Vlahinski Lakes, Balkan trout finds life.

Lakes of the Vlahina Group are located to the north-west from the Vlahinsko. They are situated in the central part of the circus and are very close to each other; they are literally meters away from one another. Their altitude is 2296 and 2294 meters.

The first lake of the Vlahinski Lakes is deep – its depth reaches 8.4 meters and its area is small – 2.9 decares. The second one is just the opposite; it has a large area – 10.45 decares and its depth is only 80 centimetres. The third one has a greatly elongated form, an area of 9.8 decares, and depth of 1.60 meters.

Here is more detailed information about the Vlahinski lakes: 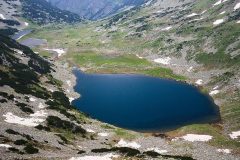 Due to its impressive features, of all the Vlahinski Lakes, the largest one takes the fifth and sixth place among the ten deepest and largest lakes in the Pirin Mountain. The view that reveals towards it, is simply breathtaking.

The third lake is located at a distance of about 300 meters north-west from the Big Vlahino lake and is at the same altitude as the second lake (10m lower). It has a markedly elongated shape with dimensions of 145 x 100 m and an area of 14.5 decares. It is quite shallow, however; it reaches 80 cm depth. For this reason, its capacity is very small – 4400 m3.

The lowest Vlahinsko Lake is situated at 2291 meters above the sea level and its shape is greatly elongated. Its dimensions are 245 x 56 m and its total area is 10.1 decares. Its capacity reaches 9000 m3.

The fifth lake of the Vlahinska group is the highest situated in the mountain, on the eastern slopes of the Gredaro Hill. It has small dimensions and area, but it is quite deep and has a large water capacity.

It is situated in the middle of the pines at 2340 m altitude and is located at 30 m distance to the west from the third lake, on the eastern slopes of the Gredaro Hill. Its dimensions are 68 x 50 m and its total area is 2.9 decares. Its depth is great – 8.4 m and the lake has a significant water capacity – it reaches almost 10 000 m3.

The Temporary lake has the highest elevation of all lakes and is the smallest one by area of the whole lake group. It is located at 2385 meters’ altitude and its area reaches 1.04 decares. It lies in a recess to the north of the Gredaro Peak.

Below the peak of Vlahinska Chuka to the north of the temporary lake there is another Lake, which is called Gredarsko lake and has an area of 1.2 decares, and its altitude is 2356 meters.

The village of Vlahi is much lower downstream of the Vlahina River. The lakes are usually rarely visited, as they are located a little farther from the hiking trails; but then, a good visibility opens out towards them from the Kabata saddle and from the surrounding peaks. Vlahini lakes can be reached most easily through the Banderishka Gate and the Vlahinski ridge.

Vlahini lakes are extremely beautiful and picturesque natural creations. The nature around them is untouched by human hand and offers enchanting views. There is an intriguing legend about the Vlahisnki Lakes, connected with one of the peaks adjacent to the lakes – the Muratov Peak. It arose during the Ottoman bondage.

The Legend Of Sinanitsa peak and the peak of the Muratov

A beautiful girl called Sinanitsa took her herd out at grazing on the steep slopes of Pirin. Her beauty was unrivaled. She knew where all the secret mountain paths were and when passing through them she admired the boundless beauty of the majestic Pirin, contemplated on the views revealing from the green heights for a long time. The girl looked at herself in the waters of Vlahini lakes, which were the colour of her eyes. 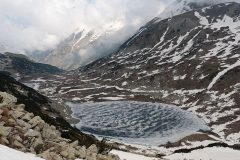 The news of her splendid beauty reached Murat bеy. He sent his Turkish posse to the mountain to find the girl and to get her to him. But in an attempt to catch her, Sinanitsa deftly broke free from the Turkish pursuers. So Murat bey was upset and decided to find her by himself, by taking the hidden mountain paths.

There walked and walked the bey, and after having already approached the hеight, where the girl was, she spotted him from the height and recognized him; she realized that he had come for her.

Sinanitsa realized that if he takes her away with himself, she would be forced to accept the Turkish faith. However, she had two choices. As Sinanitsa was true to her faith, she chose to lay down her life in order to preserve the purity of the Bulgarian Faith. The courageous girl threw herself from the top into the deep abyss.

Murat bеy was upset about what she did.  Having fallen below, he ran to see whether she was alive and to be assured of her unparalleled beauty. When he approached her, Murat spotted a part of an amulet pendant on her neck. The name of Grigoriytsa was inscribed on the amulet. She was, in fact, the mother of Sinanitsa, and also the mother of Murat himself. The other part of the amulet was hanging around his neck. That was the moment that he realized that in fact, Sinanitsa was, his own sister.

Murat was strongly grieving over the death of his sister. He also felt grief for the fact that he recalled how in the past he had been forcibly taken away from his family to become a janissary. In this fateful moment, Murat bey decided to become the protector of all the haidоuks in the whole mountain vicinity.

The peaks Grigoriytsa, Sinanitsa, and Muratov became witnesses of a truly heroic act and have kept their sad memories about this event. But we do not know for sure whether it is just a legend or a reality.