A lot of the tourist sites in town are located near to aparthotel Lucky Bansko and you can visit them during your vacation. Although the resort is famous among tourists mostly as ski and snowboard destination, it is also a center of culture with many museums architectural and historical monuments of Bulgarian culture, some of which are of national importance. 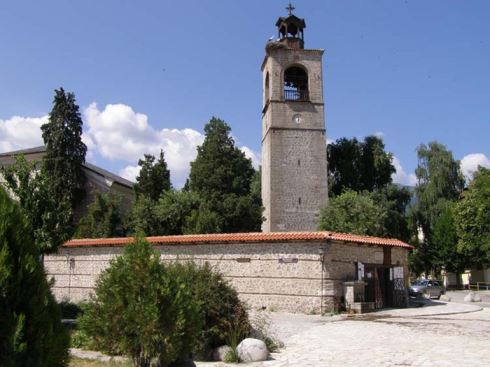 The house, which is the birthplace of the poet Nikola Vaptsarov, is located right next to the central square of Bansko. It is the first museum to even open in town in the middle of the last century. From then until now, the house has been renovated three times and the current displays include ethnographic exhibition presenting the life of Vaptsarov – from early childhood to his death.

During their visit to the museum, thanks to modern multimedia equipment guests can watch a dedicated movie about the poet, translated in German, French and English. The family tree of the Vaptsarov family is also displayed in the multimedia room.

The first floor of the house has the living room, guest room and the work room of Vaptsarov’s mother Elena, all with preserved authentic interior. The second has exhibition dedicated to Vaptsarov’s life after he enrolled into the Marine Engineering School in Varna. A lot of documents and photograph can be seen there, but undoubtedly the most valuable item is Vaptsarov’s first and only poetry book “Motor Songs”. A beautiful display also keeps the shirt, suit and watch worn by the poet before he was executed by a firing squad.

Bansko is the home of another great Bulgarian – the Revival activist Neofit Rilski. His house is located near the Holy Trinity Church in the center of Bansko and is historical and architectural monument of national importance. The first floor holds the work facilities and a specially tailored hiding place providing safety from the Turks. The second floor has a living room and the premises of the church school where the patriarch of Bulgarian scholars and teachers trained their students.

The house is also known as the Benin House – coming from Neofit Rilski’s secular name, Nikola Poppetrov Benin. He dedicated his entire life to Bulgarian science, education and culture, and his most popular work is the first Bulgarian grammar. That explains why the most precious item displayed in the museum is exactly an issue of Bulgarian grammar of 1835.

The Velyanova House is located near the central museum and is included in the list of 100 national tourist sites. It was built in 18th century when it was owned by one of the wealthiest Bulgarian families in town. However, while the owner was away, burglars attacked the house and killed his entire family which is why he never returned. The house was left abandoned until 1835 when the locals gave it to the famous painter Velyan Ognev as reward for the decoration of the Holy Trinity Church.

After Ognev completed the church, he fixed the house which later became famous as the “Velyanova House”. He embellished the house with unique painted decoration and ceiling carving never seen before in the area. All this made the house the beautiful work of art which we can still enjoy today.

The Holy Trinity Church is located right at the heart of Bansko and is one of the biggest churches in Bulgaria. The building was erected in 1835 by local master builders with donations from many people and structurally it is a three-nave pseudo-basilica. Its decoration was made by one of the most popular painters from the Bansko Art School – it has unique carved iconostasis and original frescoes over its walls, pillars and dome, created by Velyan Ognev. Later his work was carried on by his son who crafted the cross of the crucifix, the kissing icons, the great iconostasis and the throne, and by his grandson who continued the work on the iconostasis and created more unique works. All of that explains why the Holy Trinity Church is considered to be one of the brightest achievements of the Bansko culture during the Revival period.

Natural beauty lovers can take a trip to Baikushev’s pine. It’s a Bosnian pine over 1300 years old which automatically makes it one of the oldest trees in the world. Baikushev’s pine is almost 2,2 meters in diameter, over 25 meters high and has circumference of nearly 8 meters. It was named after Kostadin Baikushev – the famous Bulgarian forester who discovered this specie and describes it for the first time in 1897.