Maybe almost every one of you has visited Bansko since childhood. You have seen the historical places included in the 100 tourist sites from “Discover the Motherland to Love It”, you must have put a stamp on the map.

You have eaten local specialties in the small pretty restaurants and pubs, which are literally every step of the way in the center of the mountain town. And you went down the slopes, because it’s nice and modern, and in a more luxurious hotel you may have stopped to go to the Spa.

But this is hardly enough to make sure that you are immersed in the true nature around Bansko and the majestic Pirin above it. Even if you are not a skier or one of the most avid tourists, this will not prevent you from taking a wonderful walk around Bansko, where the most popular, but also the most beautiful routes in the Pirin Mountains start.

Plan a week of rest, or maybe just a weekend, and go up the mountain trails of Pirin. And where do you get to. But in any case you will feel dizzy from the charm of Bulgarian nature in this stunningly beautiful area. 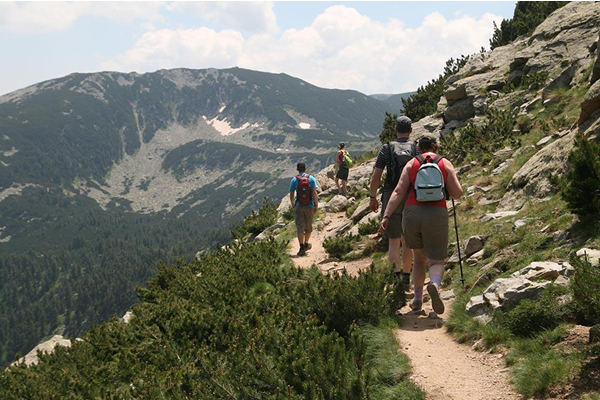 Bansko – the front door of hiking in the Pirin Mountains

Some statistics: In Pirin National Park there are 20 tourist routes that are marked as pedestrian. And more than half – 12, are indicated with the starting point Bansko! So your choice is great.

That is why the town of Vaptsarov is also known as the front door of Pirin and hiking in this beautiful Bulgarian mountain. The routes in it are over 200 – some are easier, others more complex and long, but with a common and indisputable quality: this is the way to get to know the beauty and grandeur of Pirin Mountain!

Whether you are an experienced tourist, mountaineer, professional climber or just a lover of Bulgarian nature, this is the place that will charge you with energy and inspiration for months. Until the next vacation in Bansko.

For the convenience of tourists, most of the huts in the mountain are included in specially marked routes that intersect. Following the colorful markings, lovers of hiking can easily cross the whole Pirin, enjoying its unique beauty.

To make it easier for you, we will present the three most popular tourist routes in Pirin, whose starting point is the beautiful town of Bansko. If you are not particularly experienced in hiking, choose to start the warm days of the year – late spring, summer or golden autumn in September. And don’t forget to check if it’s raining.

For starters you can go to: 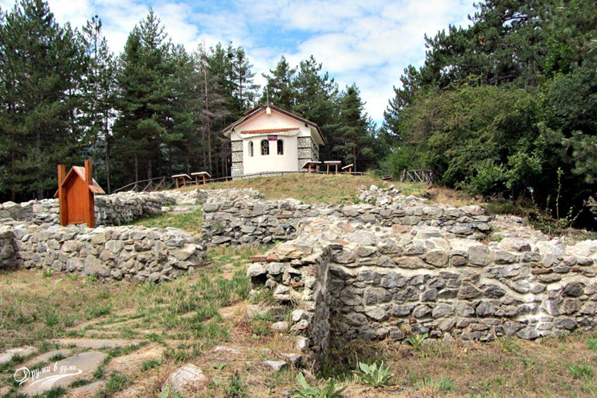 The Nameless City and the Chapel of St. Nicholas

After another 1.5 km on the same dirt road you will reach an alley that will take you to a recreation area – a gazebo where you can rest before heading up the steep slope. After 10-15 minutes of climbing you will see the fortress of the Nameless City.

Why did they call it that? Well, because this small fortress with an ancient history simply has no name or simply has not survived to this day. And how to get there, as archaeologists have found that the remains date back 35 centuries. Sometime before the 20th and 17th centuries BC, there was a large settlement in these places, the remains of which have survived to the present day.

Scientists came across the remains, as usual, by accident. As a result of excavations and research, today tourists can see the authentic artifacts – fortress walls, bone remains and skeletons of giants, etc. These skeletons, according to anthropologists, to people with two meters of giant stature, suggested that are from the Thracian tribe Dai, known for the courage of their warriors giants, also described by Homer.

Today a new building has been erected here – a chapel named after the place – “St. Nicholas“. Beneath its foundations are the remains of an ancient basilica of Byzantine origin.

To Bezbog hut – on foot, by car or by lift

You can also choose an easier route – to Bezbog hut and Bezbozhkoto lake. It is for the inexperienced and unaccustomed to difficult mountain hikes.

Hikers will recognize it by its green markings. The full route is through Dobrinishte – hut “Gotse Delchev” – hut “Bezbog” and hut “Pirin”. The end point is the town of Melnik, which is also worth a visit. You will have to spend a day and a half for this walk, so plan to spend the night in one of the huts.

6 km from Bansko is Dobrinishte– also a famous spa because of the healing mineral water there. It is from Dobrinishte that you can go to Gotse Delchev hut. It will be easy to move at the beginning, because the road is asphalt. Through Balev Bridge you continue to the Cheshmata area and so you will reach the first rest – at the hut “Gotse Delchev”.

But don’t stay too long. It’s time to set off for your real goal – Bezbog hut. You go to the High fir, then to Tuzla through the Salt, And here you are at the hut “Bezbog”. Refreshing sips of tea or coffee await you there. You can eat something more substantial.

Right next to the hut is theBezbozhkoto Lake. Take a walk along the shore, you can go around it as far as you can. 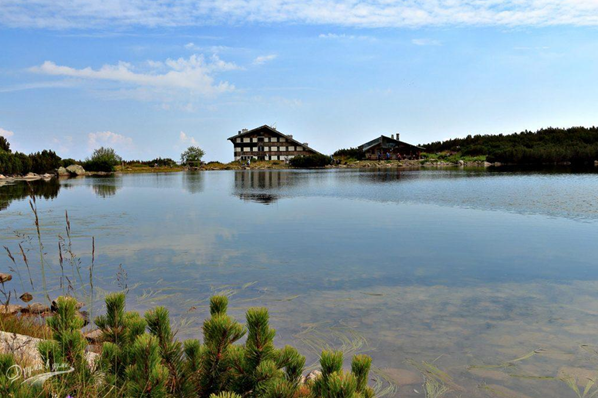 The more hardy and insatiable for mountain beauty and space, can go around the lake on the other side, and go up the steep, just opposite the hut. The path is steep, you know – the locals did not accidentally call the place Dushevadkata, but half an hour of climbing is somehow sustained.

On the other hand, the mirror of the Bezbozhkoto Lake, which will open in front of you, is fabulous. As you walk up, enjoy the unique granite pyramids Orlovets, look up to the majestic Nameless and Samodivski peak, also known as Jengala.

If you continue on the path, you will reach other beauties that will make your walk unforgettable and the fatigue from the road imperceptible.

After the yellow and green markings in about 30 minutes you are on Popovo Lake, which will amaze you with the dark blue of its water.

After it stretches the water expanse of Argyrovo Lake. As you pass through the Komitski Char area, you can already expect the next vacation – the cherished hut “Pirin”.

However, you did not forget that if you want to brag to your friends that you have covered the whole route, you should go to Melnik. You will not regret if you visit it, because it is a unique village – in fact the smallest town in Bulgaria, which is always worth seeing.

For the lazy, who are not tempted by difficult hikes in the mountains, we have left the most pleasant information:

To the hut „Bezbog” you can also reach by car. Or take the lift from hut “Gotse Delchev”, which will take you only 30 minutes to the hut “Bezbog”. And the picturesque views will be found just below your feet and as far as the eye can see!

Two routes – to the hut “Banderitsa” 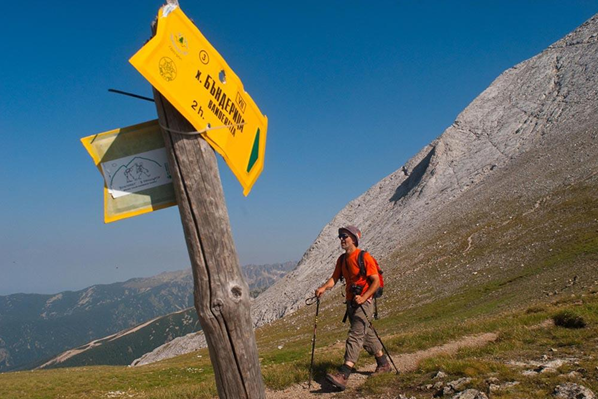 For the most enduring we left the third route – to the hut “Banderitsa” through the “Caves” to the huts “Vihren” and “Yane Sandanski”, or on the short “Banderitsa” – “Poemkata”. For the first you will need about 9 hours, and the second you can take it for 2 and a half hours. However, do not underestimate both routes, especially the second one! You will really need willpower and endurance!

And so – for “Banderitsa” through the area “Caves” you will have to reach from Bansko to the entrance of the National Park “Pirin”, which is 16.3 km from the city. To reach Banderishka Polyana, you have to go to the caves, passing the fork for the fishpond, then to Dokimo. Your goal is Banderitsa hut, but you should know – it is located only at the upper end of the meadow, on the left bank of the river of the same name.

Banderitsa hut is emblematic for tourists tempted by the beauties of Pirin. What mountain songs have been sung around her, how many fates she has intertwined! And the tea there is one of the most fragrant mountain herbs.

Rest well, because from there follows a difficult transition – through the fountain above Baikusheva mura for Vihren hut and hut. Bregovitsa through the Banderishka Gate and the circus Golyamo Spano Pole. If you get there, you are left with only the Spanopolska River and here is the cherished hut “Yane Sandanski” – the end point of the route.

You remember that we warned you – this transition is not for everyone. If you do not feel prepared, you better not leave, so as not to spoil your memories of the holiday in Bansko later. But if you hire, know that you will be truly satisfied and proud of yourself.

The same goes for even more so if you take the supposedly shorter route to Banderitsa for the Poemkata saddle.

From Banderitsa hut you go to the fork for a shelter known as “Kazana”, and from there to the saddle Poemkata. Short, but… difficult! 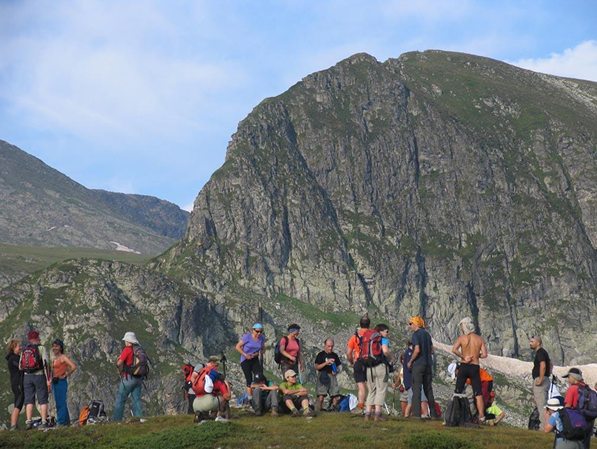 Like most routes in Pirin, this one is not easy at all, despite its brevity. There are rocks that have to be climbed, steep hills, etc. When you go to the Poemka, at the beginning you can be deceived that the steep is not who knows what, but later you will see that it is not so. The slopes, at the expense of straight and flat sections, are becoming more and more. And one more thing that mountain connoisseurs warn about: if you are afraid of the high, etc. acrophobia, you better not go this route!