If you have a road to Bansko or Razlog, take some time to see the Painted Church. The object is still being explored, but is already attracting many tourists who come just to see it. 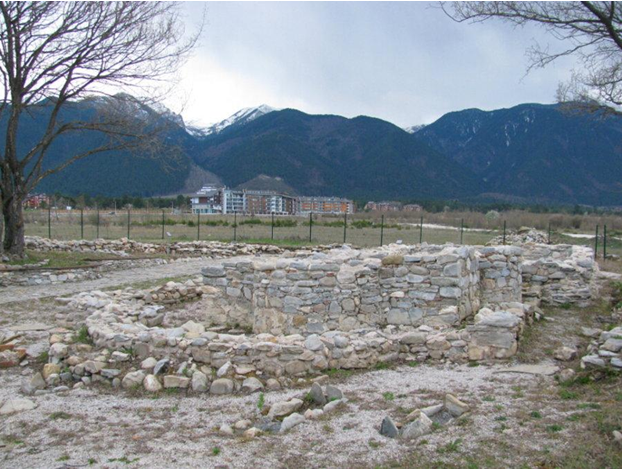 The Painted church – the end of oblivion

In 2006, the Razlog municipality decided to conduct a drilling survey of a land near the town, which they believe is suitable for the construction of an information center. The teams start the survey, but from the very beginning they have to stop work because they come across the remains of an old building.

Archaeologists from the Regional Historical Museum – Blagoevgrad were invited to the field, who found that the discovered remains were actually part of a monastery complex. The discovery leads experts to believe that just a few meters under their feet may be hidden an extremely important find for the region. The municipality of Razlog did not waste any time, but formed a team that began an archaeological study of the terrain.

The excavations of the archeological site in the Betolovoto area began in 2006, and the head of the research is Tsvetanka Komitova. The study was funded by the Razlog municipality, and both experts and volunteers from the city are taking part in the excavations.

During the first days of the excavations, archaeologists discovered part of a wall, which in further research turned out to be part of a medieval temple, built most probably in the early twelfth – thirteenth century. The church is small, triconch and originally consisted of only one room.

At a later stage, another, much larger room was added to it, and so the church was expanded by another 13 meters. Near the entrance of the temple, archaeologists found a large number of broken frescoes, which gives them reason to believe that the church was richly decorated.

Due to the discovered pieces of frescoes, the locals began to call the archeological site the Painted Church and it is still known by this name today.

But this is only one part of the story. During the work around the entrance of the medieval temple, the specialists were surprised to find that under it are the ruins of an even older church. The older church turned out to be an early Christian basilica from the 5th to the 6th century, and the most amazing thing is that the medieval church is completely inscribed in the early Christian church.

The study of the Painted Church lasted from 2006 to 2008, after which it stopped for several years before being renewed in 2016. During the re-examination were found:

The Painted church through the eyes of archaeologists

The two temples inscribed in each other, as well as the artifacts found on the site, give archaeologists reason to believe that this place he had a tempestuous lifeduring the Second Bulgarian Kingdom.This is evidenced by the nearby remains of two other medieval churches – “White Church” and “St. Nicholas“. Therefore, experts are of the opinion that the terrain should continue to be explored and studied, because where there are churches, there is probably a whole city.

The study of the terrain and the inscribed temples continues, so you can see the Painted Church a little further away (through the fence). However, the municipality of Razlog is working hard to create a small archeological park, where visitors can see not only the Painted Church, but also the other two temples – “White Church” and “St. Nicholas”. We hope that the park will be accessible soon so that we can all touch this piece of history.

Where is the Painted Church?

The archeological object is located about 7 km. from the town of Razlog in the Betolovoto area. The direction is southwest. If you are a guest of a hotel in Bansko like Lucky Bansko, you can easily reach the object by going in the direction of Pirin Golf & Country Club. The painted church is only 700 meters from the golf course. 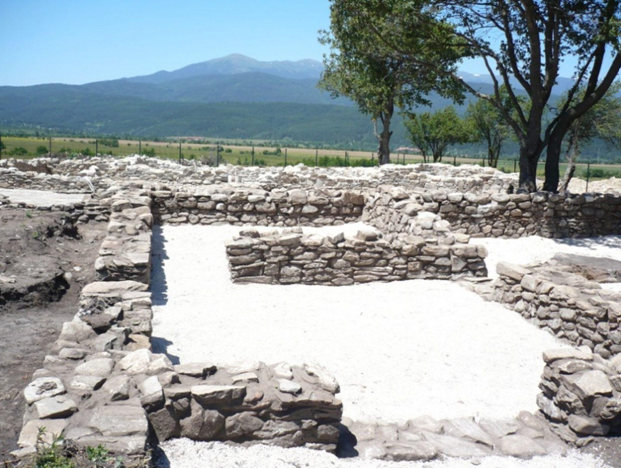 The popular landmarks that you can see while on vacation in Bansko or Razlog are many and we are sure that you know them too. That’s why we want to introduce you to some not very familiar, but very interesting places that you can visit while you are in the area.

Thracian sanctuary in the Stolovatets area

If you walk in the center of Razlog, you will certainly be impressed by several large pieces of stone with ornaments on them, which are located in a circle resembling the Sun. In fact, these are exact copies of the tablets found in the Thracian sanctuary in the Stolovatets area.

The state of the object is not very good, but from the few preserved artifacts it is clear that the find is unique not only for the region but also for the country. Experts believe that the sanctuary existed from the end of the Bronze Age to the beginning of the Iron Age and most likely sacrifices were performed in honor of the Sun, which the Thracians worshiped.

During the researchof the object, archaeologists came across one of the greatest mysteries ever discovered in our country. At some distance from each other were found 3 large marble slabs with rich ornamentation on them. The slabs date from the 2nd century BC, and the reliefs are associated with the cult of the Sun and the sanctuary in which they were discovered.

The churches that bear the name of the harbinger of winter – St. Catherine are only three in our country. And the oldest of them is located about 7 km west of Razlog, in the area “Katarino”.

According to preserved records, the temple was built at the beginning of the Ottoman invasion (XIV century) and originally served only as a chapel, where locals came to pray to their GOD away from Turkish views.Unfortunately, only a few years later, for unknown reasons, the temple was completely destroyed and ceased to exist. But even though it is not there, the people of Razlog have not forgotten it and after a while they raise funds and restore it even more beautiful and bigger.

Today the church “St. Catherine” is completely restored and functioning and locals and guests visit it to light a candle and pray for health.

There is a belief that if a girl prays in church, she will soon find her chosen one. 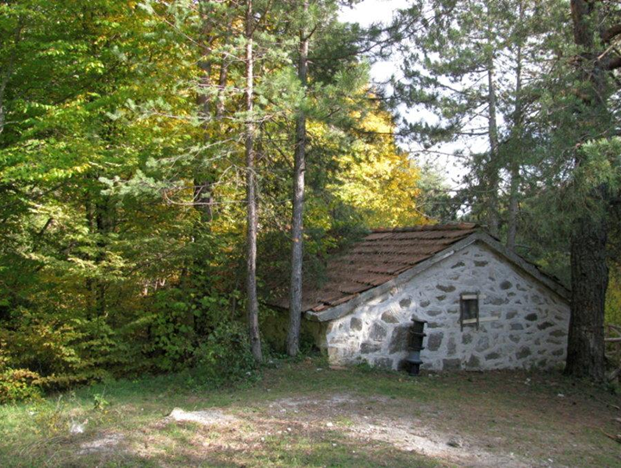 About 3 km. from Razlog, in the direction of Bansko are the ruins of the medieval church “Holy Trinity”. Unlike the church in Bansko, which bears the same name, the Razlog church has a very unfortunate fate.

Exactly when the Razlog “Holy Trinity” was built is not known, but based on the plan and construction, experts suggest that this probably happened in the 13th century, shortly before our country fell under Turkish rule. It was almost completely destroyed after the Turkish invasion and the forced conversion of the population of the region to Islam.

The church is triconch, cross-domed, with a length of nearly 10 meters and a width of almost 7 meters. From the preserved ruins it can be seen that it was built of stone in places intersected by several rows of bricks.

So far, the medieval temple has not been restored, so all you can see from it are ruins, but believe me, even just as ruins the object is worth seeing. And we hope that soon the municipality of Razlog will take some measures to restore the unique medieval temple so that we can see it in all its glory.

“Kalyata” is located about 19 kilometers from Razlog, in the direction of Yakoruda. The fortress is late antique and medieval and according to experts was probably built in the late IV and early V century. The main function of the fortress was to serve as a fortification and to protect the Slavic population from the Avar invasion.

Situated on a heavily level terrain and surrounded by thick outer walls, the fortress has been bustling with life for about two centuries. In the VI century, however, it was destroyed almost to the ground. Shortly afterwards, it was rebuilt to be destroyed again in the 12th century. Its repeated destruction most likely happened during the conflicts between Bulgaria and Byzantium. The population left the fortress and it was not revived.

If you decide to visit the “Kalyata” it is good to know that the fortress is difficult to access due to the large displacement of the terrain. You can reach the beginning of the hill by car, then climb a steep path to the fortress.

If the steep climb does not scare you, you can, after visiting the fortress, continue your walk to the karst spring Babina Voda, which is located about 2 km from the “Kalyata”. 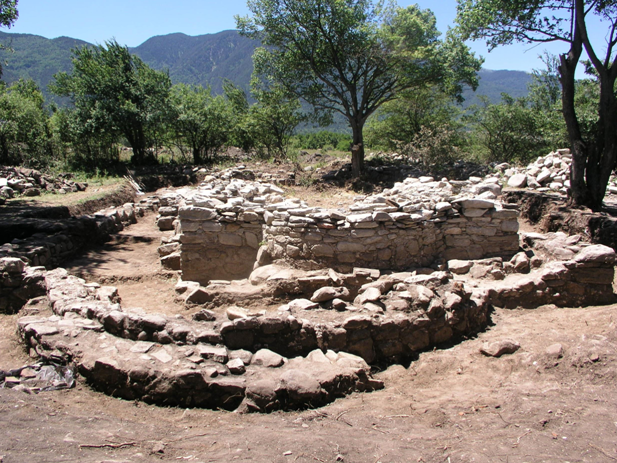 The village of Dolno Draglishte is located 18 km from Razlog, in the direction of Belitsa. And there you can see a little known but very beautiful Revival church.

The church “St. Dimitar” in Dolno Draglishte was built in 1835. Architecturally, the temple is a three-nave basilica with a semicircular apse. The three naves of the Orthodox Church are divided by columns, and the ceilings are painted according to the traditions of the time. The iconostasis in the temple is impressive – two-row, carved, and in its central part there is an openwork carving.

Most of the icons were painted by representatives of the Tryavna School of Painting, among whom are Dosyu Koev, master painter Dimitar and others. It is also interesting that “St. Demetrius” was built in the likeness of the church in the Rila Monastery, and the funds for the construction were collected by the population of the village.