Bansko is a resort popular all over the world as one of the best destinations for lovers of winter sport sand there is a reason why. The ski tracks in the resort are very well maintained, the season is long and the hotels offer a good service to their clients.

But Bansko is not only (and simply) a good ski resort that is deserted after the ski season. On the contrary. In the resort town everyone can find a sporting event or activity to join, regardless of whether they choose to visit Bansko in the summer or in winter.

It is impossible not to start with winter sports when talking about sports in Bansko, isn’t it? 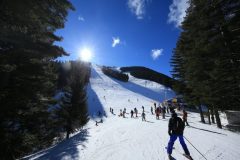 Every year, winter sports enthusiasts come to Bansko and from near and far away places to enjoy the sporting attractions that are waiting for them in the resort.

The biggest winter sporting event for Banskois the beginning of the new ski season, which is traditionally opened in the middle of December and lasts until April.

Every December, world ski legends such as Mark Girardelli, Alberto Tomba, Lindsay Won, Christian Ghedinaand others come to the opening of the season in the ski resort. The legends take part in various games and competitions, give open air lessons to their fans, have fun with everyone else, descending on the white slopes of Bansko.

For several years now, the resort townhas been hosting the World and European Alpine Skiing Cupsthat attract some of the most popular athletes who come to Bansko to participate in the competitions but are back again because the resort remains in their hearts.

Besides hosting the Alpine Ski World Cup, the town hosts a round of the World Biathlon Cupand also the Snowboard World Cup.

Bansko can offer something to anyone who loves winter sports. Here you can comfortably ski or learn how to ski (if you have not already done so), ride a snowboard, snowkite, try out a Freeride, biathlon, winter orientation, winter trekking, snowmobiling, driving ATV, etc.

Bansko is not a resort oriented only (and only) to winter sports and can offer many more sports events and activities that can be practiced outside the winter season.

Sports activities outside the winter season

Over the past few years, Bansko has attracted VIP celebrities and golfers who arrive at the resort to participate in the Panther’s Journal Beginners Tournament which is organized by the Pirin Golf & Country Club. 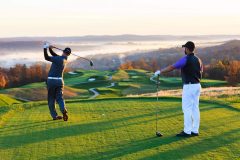 There are courses organizes in Bansko for beginners in golf where the ones who want to learn some of the tricks and the specifics of golf.

Several golf tournaments are organized annually in Bansko, in which all those who want to give it a try in order to see at what level they are compared to other participants can take part.

Outside the organized tournaments anyone who loves this sport is welcome to play the game on the golf courses of Bansko.

The beginning of mountain biking as a sport in Bansko was set by a group of Englishmen in 2009. 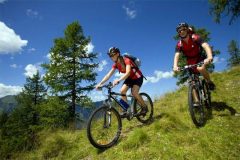 Since then, the Pirin National Park Directorate together with a non-governmental organization have managed to mark about 200 km of routes for mountain biking so that anyone who loves this sport can embark on the exciting exploration of Pirin and Rila on two wheels.

Cyclists can explore the mountain by taking a route on their own and can also trust a guide to lead them on the selected route.

If you are a cycling enthusiast, Bansko awaits you from the beginning of June until the end of September.

If you want to compete with the mountain biking professionals, Bansko hosts the third round of the BG Enduro Series. The competition takes place in August and includes bikers from around the world. Participants in Enduro – Bulgaria compete on a 34 km-long track with 1,200 m of displacement.

For several years Bansko has been hosting the PIRIN RUN Mountain running and cycling competition which takes place in late June. The competition is attended by fans of these sports as well as popular names in the sport world such as Kiril Nikolov – Dizela, Shaban Mustafa and others.

Particularly attractive for PIRIN RUN spectators is the duathlon competition, where participants have to go up to the Vihren mountain hotel on bikes and then continue to the Vihren Peak on foot.

Yes, fishing is also a sport (as surprising as it could sound to you ladies) and is one of the sporting events and activities that Bansko offers.

If this is your hobby and your hands are itching to throw the fishing pole in some quiet and peaceful place, the Belizma and Riviera dams will appeal to you very much. The dams are full of trout, carp and mullet so you can practice this sport at large.

Both dams in the summer months organize sport fishingcompetitions where you can get involved with your whole family and win the prizes the organizers provide.

Summer is the best time for rock climbing and Pirin Mountain can offer you many places to practice your favorite sport.

The places where rock climbing is allowed are: the Peshterite area (3 km away from Bansko), the north wall of Vihren peak, the Kamenitza, Bunderishki chukar, Sinanitsa, Kuklite and other peaks.

You can practice Rock climbing can be practiced on your own, but the better option is to be accompanied by an experienced instructor.

One of the most popular activities in Bansko during the summer months is paintball, which you can practice with your friends in the woods or on a special playground. 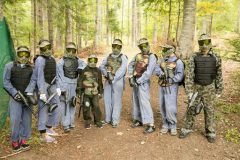 Paintball is a game that is fun, interesting and competitive, and after its end you will feel refreshed and free from the accumulated stress.

It has been shown that team games that take place outside the comfort zone improve the workflow and create a stronger relationship between employees. Well, if you are looking for a team building activity for your team you will hardly find anything more uniting than paintball in the Pirin forests.

If you want to show what your team can do, you can join sports paintball competitions. Thereare more and more foreign teams taking partin the tournaments that are organized during the summer in Bansko and the competitions are very competitive. 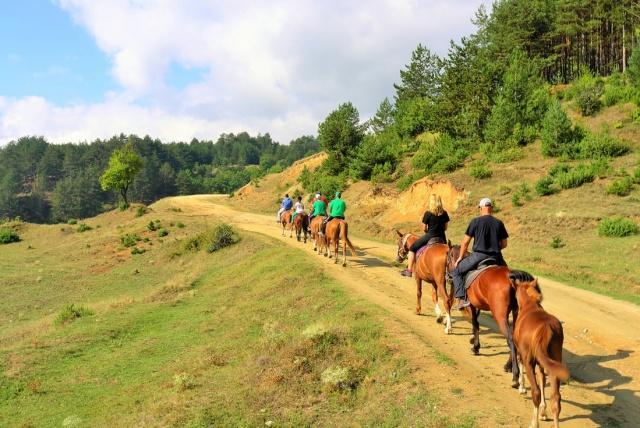 Riding basesoffer beginner lessons under the guidance of qualified instructors who will guide you and show you how to communicate with horses.

If you are doing well with horseback riding, you can take part in some of the mountain trekking on horses during which you will be always accompanied by highly qualified instructors who will not only organize an interesting day in the nature but will also tell you about (and show you) one of the biggest sights of the Pirin region.

Between the Sky and the Earth

The unusual but very exciting and adrenaline rising sport activity that you can enjoy while on holiday in Bansko is the Sky – Earth program. This program allows you to get to know the mountain in different ways using a “trolley” (descending between two points that are at different altitudes) or “abseiling” (descending vertically on a rope).

Tennis is probably one of the fastest developing sports in Bansko which gain popularity. The resort town is proud of its several tennis courts as well as a tennis club where the town’s children train with great pleasure.

Last year, the first tennis court tournament was held in Bansko, in which young people aged between 15 and 29 took part. The tournament attracted the interest of the residents and guests of the town, so we hope that this sport in Bansko will continue to grow and the town will soon be hosting national (and why not European) tennis tournaments.

If you’ve always dreamed of a really extreme and exciting rough terrain driving, you can join one of the most popular and adrenaline rising sports activities that are organized in Bansko – the OFF ROAD adventures in Pirin.

The routes you can drive are without a road network, the terrain is very diverse and full of all kinds of obstacles. You can enjoy the adventure yourself or hire a driver as usually advised by the organizers. The choice is yours!

Orientation is a sport that requires a good instinct for orientation in anunfamiliar location, stamina, and quick reactions. If you have always wanted to venture into such an adventure, you can visit one of the Summer Orienteering courses organized in Bansko.

And if you are a member of the Bulgarian Orientation Federation, you can take part in the races that take place in the town during the summer.

Would you like to fly? You just have to climb the lift to Todorka peak and go down with a paraglider. Of course, if you have no experience, you will be accompanied by an instructor in the 30-minute roaming about in the clouds.