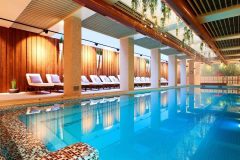 Answer: SPA hotels are those that have spa centers occupying a minimum of 20% of the hotel area and offering different treatments – classic or non-traditional, aimed at rejuvenating, beautifying, mental and physical health, relaxation and anti-stress. A special MT Regulation was issued in January 2016 stating the specific certification requirements for spa centers, which then entitles them to be called a SPA hotel.

There are two versions of the word’s origin. According to one ancient Romans, they used the term “Salus per aquam” (SPA), thus describing the thermal springs with which they treated different kinds of diseases.

According to other sources, the term derives from the famous Belgian town of Spa, which in the 16th century was known all over the world with its mineral springs and as a place to rest and restore the physical forces of the body, charging with positive energy, curing diseases and Prophylaxis. 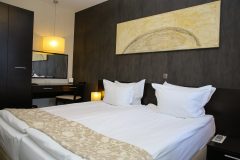 At Lucky Bansko Spa & Relax Aparthotel there are studios that are the analog of a double room. The studios are larger in size and have a fully equipped kitchenette. 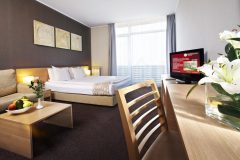 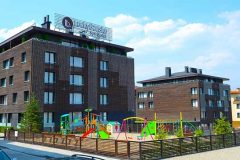 4. Q: How many rooms does Lucky Bansko hotel have?

A: Lucky Bansko Aparthotel has 115 rooms. Aparthotel Lucky Bansko has 67 studios and 48 apartments and they all have a fully equipped kitchenette, bathroom with bathtub, SOS system and telephone. 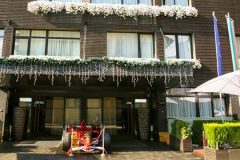 5. Q: How much is the room at Lucky Bansko Hotel? 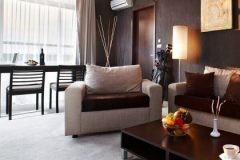 6. Q: How much does the double room in Lucky Bansko hotel cost? 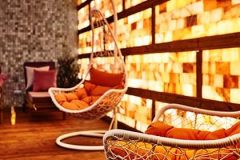 7. Q: Hotel Lucky Bansko is there a SPA?

A: Aparthotel Lucky Bansko has a modern SPA Center with numerous attractions, including BIO pools.

8. Q: What is the owner of Lucky Bansko Hotel?

A: Borislav Malinov is the owner of the hotel.

He is a graduate of the University of National and World Economy, major in Economics and Trade Management. He started his business in 1993 with Politrade, and later founded one of the largest companies in Bulgaria for buying and recycling of waste – “Nord Holding”.

From 1995 to 2003 he is the manager of “Nord Holding”, one of the leading companies in the field of trade and recycling of waste metals in Bulgaria. Managing Partner of Stroyconsult EOOD and a consultant for economic and financial affairs in Lucky Bansko, part of the holding structure of Nord Holding OOD.

Malinov was the chairman of the Bulgarian Recycling Association from 2006 to 2010 and the deputy chairman until September 2011 when he was again elected as head of the association. 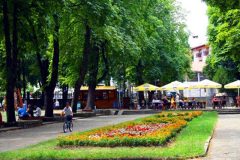 A: There are many sights in Bansko – natural, cultural, historical. The town is situated at the foot of the Pirin mountain, the largest part of which is part of Pirin National Park, which is under the protection of UNESCO.

In Bansko there are historical museums, many antique houses with preserved architecture, churches, monuments dedicated to prominent Bulgarian Revival. There are also places for entertainment. In winter there are wonderful winter sports.

A: There are many interesting places worth visiting:
– Rila Monastery, Rozhen Monastery and Rupite;
– Settlements of architectural reserves – Leshten, Kovachevitsa;
– You can visit Melnik – the smallest town in Bulgaria, with a unique natural pyramid pyramid phenomenon. Here you can taste the famous Melnik wine;
– Visit to a traditional ethnic house in the village of G. Draglishte;
– Visit of an 18th-century church in the village of Dobarsko – The temple “St. Teodor Tiron and Theodor Stratilat”;
– Dancing bears park in the town of Belitsa;
– Walking tours in Pirin;
– horse riding in the village of Bachevo;
– Paintball in the vicinity of Bansko;
– rafting along the Struma River;
– Fishing in the vicinity of the city;
– Play golf in Pirin Golf. 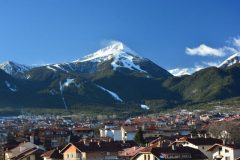 A: The height is 927 m above sea level, at the northern foot of the Pirin mountain. 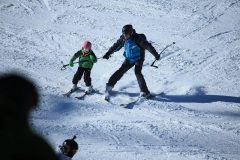 The Bansko ski slopes are built in two main areas – Chalin Valog and Shiligarnika (1700 – 2500 m), on the northern slopes of Pirin, about 10 km. From the city. They are easily accessible, about 25 minutes by the new lift “Gondola”, which has a starting station in Bansko. The total length of the slopes and ski runs is 75 km. Of these: beginner runs – 35%, advanced tracks – 40%, trails for experienced – 25%. Their location allows for many combinations and drops with varying difficulty and slope.

For skiers and snowboarders there are 75 km of professionally prepared and reliably secure runs, as well as 22 km / 13.2 km long, 2.4 km ski lifts and 6.2 km cabin / modern high capacity lifts that transport quickly and comfortably until the start of Each runway.

A modern gondola lift – a gondola with eight seats, takes skiers from the city to Banderishka Polyana with a capacity of 2,400 people per hour. Equipped with artificial snow machines are 100% of the tracks, which guarantees enough snow cover from December to May.
The highest point of the ski center is 2560m and the lowest 990m.

The ski center offers a wonderful 16 km. Ski track equipped with artificial snow and lighting machines connecting the high parts of the resort with the town of Bansko. 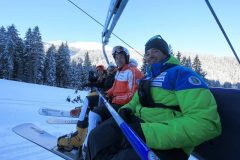 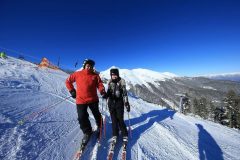 14. Q: When does the season begin in Bansko?

A: The Bansko season starts in the middle of December with a sumptuous party. 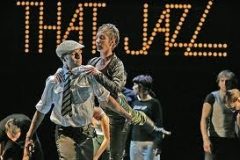 A: The Jazz Festival in Bansko always in August, usually in the first half of the month. 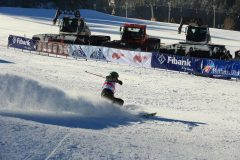 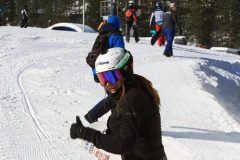 A: Snow in Bansko has until the end of April, but the ski season ends in early April. 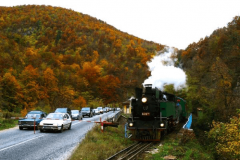 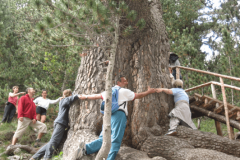 19. Q: How to get from Bansko to Baikusheva fir?

Baikusheva Mura is located at 1930 m. In the Pirin Mountains. It grows near the Banderitsa chalet and Vihren hut. In 2004, the landscape was restored around the tree in order to preserve it. 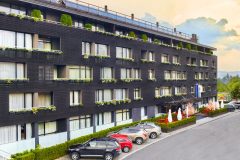 A: Lucky Bansko offers two free outdoor parking by the hotel with video surveillance. The hotel also has an indoor parking garage.

If you want to use the paid parking lots in the municipality of Bansko, please contact them at:
– “Tsar Simeon” Str. – from “Viktor Yugo” Street to “Bulgaria” Str. And “Nikola Vaptsarov” Square to the crossroad with “Economist Chuchulina” Str.
– “Pirin” Str. – from a crossroad with “Otets Paisiy” Str. to “Vazrazhdane” Square;
– “Ivan Vazov” Str. – from the service parking lot of the municipality to Tsar Simeon Street and the gorge between the two streets;
– Widening (parking) – between “Viktor Yugo” Str., “Dimitar Talev” Str. and “Louis Pasteur” Str. (behind the Polyclinic). 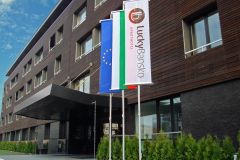 A: Lucky Bansko Aparthotel SPA & Relax is a wonderful place to relax during all seasons. This is the hotel where you will receive a guaranteed quality product, maximum comfort, great care and perfect service from all hotel staff.

There are over 350 hotels and accommodation in Bansko with a different star rating and a great price difference in the services offered. 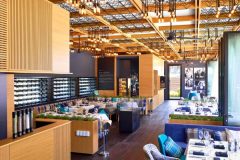 A: In Bansko there are many places where you can taste delicious. If you want to try really tasty dishes prepared with bio products, visit the restaurant Les Bistro in Lucky Bansko Spa & Relax Aparthotel. In the summer, just for 24 leva you can choose 3 meals from the restaurant menu. In winter the price is 30 leva for 3 dishes of choice, but there are tasty dishes in 4 variants with aromatic, freshly baked bread, which are served to every guest.

The water that serves you at the Le Bistro Restaurant is water and is free.

If you love Italian cuisine, you must visit the Leonardo Restaurant, which is part of Lucky Bansko. In the summer you can enjoy the wonderful outdoor pool of the aqua complex, eat a delicious pizza or order a refreshing cocktail. The winter is cozy around the fireplace, and the dishes are superb.

Prices are higher, but service is more than perfect and worth it. The kitchen is according to original recipes, the pasta, the desserts and the ice cream are also prepared on the spot and are not semi-prepared.

The alpine restaurant Fondue – the first one in Bansko – is to be opened.

In the restaurants of Lucky Bansko you can also find tasty gluten-free food and bread, which is not so common. 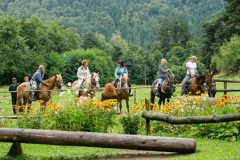 A: The climate is mountainous, with excellent conditions for winter sports.

The first snow falls in early December and the snow cover lasts until the end of April. Summer is warm, with cool evenings. 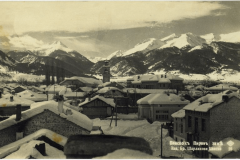 A: In 1912, after the liberation of Bansko from Turkish slavery, awake public figures from Bansko filed a petition to the National Assembly. This is the year in which Bansko is officially declared a town.

In the 15th-16th centuries, several neighborhoods were united and formed Bansko as one settlement. For the first time we have a documentary record of Bansko in the Ottoman register of the shepherds (shepherds) of 1576

Economic and spiritual upheaval occurred in the 18th and 19th centuries, as seen in the acts of local self-government. The Bansko Bulgarian municipality was founded around 1850 as a continuation of the village community formation in 1833 for the construction and printing of the church “St. Trinity “(illuminated in 1835). 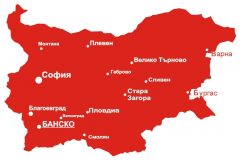 25. Q: Where is Bansko located on the map of Bulgaria?

A: Bansko is located in Southwestern Bulgaria, about 80 km. From the Greek border, Exohi (about 1.5 hours by car).

Bansko is situated at the northern foot of Pirin Mountain. The town is located at 925 meters above sea level, 150 km from Sofia and 96 km from Blagoevgrad. 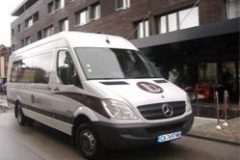 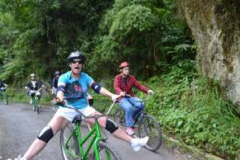 A: Bansko is Blagoevgrad region. Bansko is situated in Southwestern Bulgaria, near Razlog and is the administrative center of Bansko Municipality. 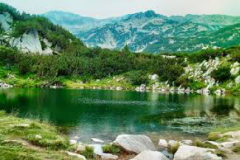 A: Pirin mountain is located in Bansko. Bansko is situated at the foot of Pirin mountain, but it is only 15 km / 16 min from the Predela locality, where 3 mountains – Pirin, Rila and Rhodopes are gathered. 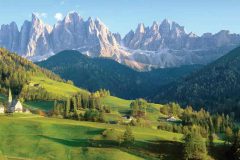 29. Q: Which river passes through Bansko? 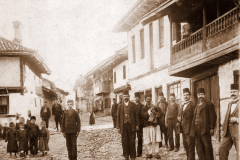 30. Q: Where does the name of Bansko come from?